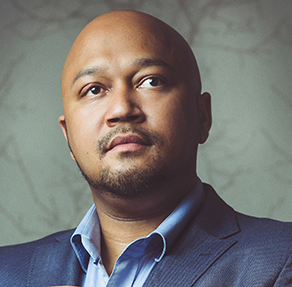 Eusebius McKaiser is a political analyst, broadcaster and writer, based in Johannesburg. His academic background is in moral philosophy, having studied and lectured in the philosophy department at Rhodes University, before doing research in moral philosophy as a Rhodes Scholar at Oxford University. He remains an associate of the Wits Centre for Ethics.

He has written extensive social and political comment in the local and international print media, including previously carrying a column in the New York Times, and has also carried a column syndicated across Independent Media. He appeared on many international broadcast platforms including the BBC, Sky, CNN, including Amanpour.

Before his media career took off, McKaiser worked as an associate at globally renowned strategy consulting firm, McKinsey and Co. Eusebius is a former national and World Masters Debate Champion. He coaches debate and public speaking, and is also a regular MC, facilitator and keynote speaker on the conference circuit. He has three best-selling books out, A Bantu In My Bathroom, Could I Vote DA? and Run, Racist, Run: Journeys into the heart of racism; all of which were released to critical acclaim. Eusebius is currently a contributor and analyst to TimesLIVE.